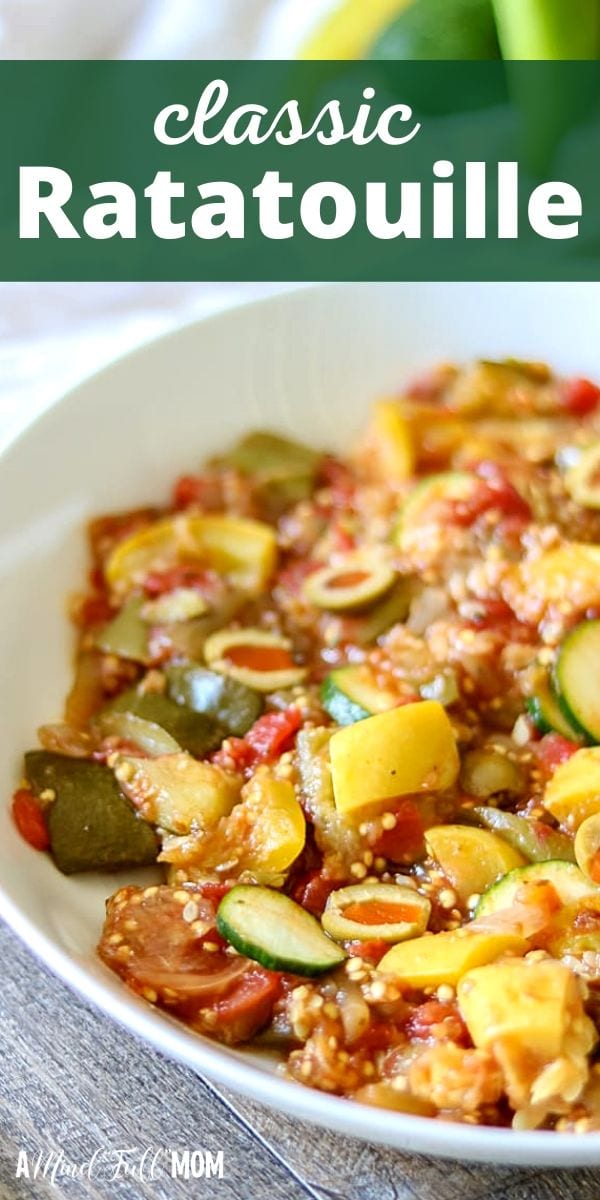 Ratatouille is a classic French vegetable stew made with eggplant, zucchini, peppers, and tomatoes. It is a hearty and healthy dish that is rich in flavor, gluten-free, vegetarian, and absolutely delicious!

Ratatouille is a great way to use up fresh summer vegetables like eggplant and zucchini. Paired with a Greek Salad and Crusty Dutch Oven Bread, it makes a hearty summer meal.

Ratatouille is a vegetable stew that originates from Provence, a region in France, known for incredibly balanced recipes and fresh produce. It is made with fresh eggplant, zucchini, peppers, and tomatoes, that are simmered with spices and olive oil to develop a rich, flavorful stew.

You will occasionally see Ratatouille recipes made into fancy layered casseroles, but classically this recipe is a peasant stew, and that is exactly how I make Ratatouille myself.

My recipe for Ratatouille does feature one untraditional ingredient, green olives. I learned this trick from my mom. The olives add a bit of tang and acidity and I simply love the addition.

While Ratatouille does involve many steps and needs time to simmer, nothing is complicated and the labor required transforms humble ingredients into something spectacular!

How to Make Ratatouille

Step One: Prepare the Eggplant

Salting eggplant is crucial to ridding it of its natural bitterness. Do NOT skip this step.

If you opt to use cherry or grape tomatoes, you simply need to slice the tomatoes in half before adding them to the stew. However, if you are using Roma or Vine-Ripe tomatoes, it is best to skin the tomatoes and remove the majority of the seeds for the best texture in the final stew.

Ratatouille is incredibly versatile and can be served in a variety of ways.

Is salting the eggplant necessary?

Yes! Skipping the step of salting the eggplant will cause the ratatouille to be a bit sour, bitter, and the texture to be off. In fact, if you think you don't like eggplant, you may have not had it prepared correctly--which makes a world of difference.

Do you have to skin the tomatoes?

If you opt to use cherry or grape tomatoes, you simply need to slice the tomatoes in half before adding them to the stew. However, if you are using Roma or vine-ripened tomatoes, it is best to skin the tomatoes and remove the majority of the seeds for the best texture in the final stew.

How long does leftover Ratatouille last?

You can store leftover Ratatouille in an airtight container for up to 5 days. Just as most stews and chilis, the flavor intensifies as it sits.

This easy recipe for Ratatouille makes a great summer meal that is filled with nutrients and flavor. I would love for you to leave a comment and review if you gave this Ratatouille a try! 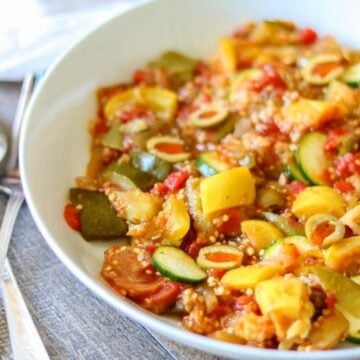 Tomatoes: In place of the large tomatoes, you can use 1-pint cherry/grape tomatoes, that do not need skinned. Or use 16- ounces of can diced tomatoes or whole tomatoes.  Storage: Leftover Ratatouille can be stored in an airtight container in the refrigerator for up to 5 days. Oregano: In place of dried oregano, use 1 tablespoon fresh.  Olives: Spanish olives are not traditional, but add so much flavor and texture. Feel free to omit.  Red Pepper Flakes: Omit to control the heat level.

This post was originally published in 2015 but was updated in 2021 with new tips.