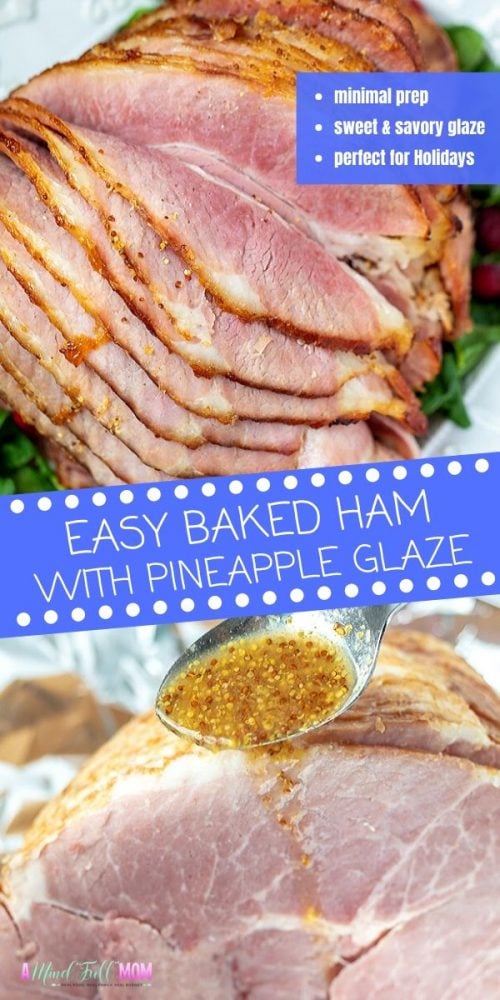 Transform your ham into something spectacular with a sweet and savory pineapple brown sugar glaze. This simple recipe for Baked Ham is perfect for any holiday dinner or just a special weekend meal.

This recipe for baked ham is one of the easiest, yet most impressive ways to prepare a ham. The ham is baked low and slow with an easy sweet and savory glaze that gives this baked ham the most incredible flavor.

And this recipe for ham could not be easier to make! There is no basting, no broiling, no baby-sitting this ham. The ham cooks low and slow in the glaze, keeping this ham tender, moist, and full of flavor. Trust me, this is one ham everyone will remember!

This Glazed Baked Ham makes the most spectacular holiday meal when served with Scalloped Potatoes, Green Beans Almondine, and a Strawberry Spinach Salad.

There are two main components to this recipe--the ham and the glaze for the ham. The glaze on this ham is OUT OF THIS WORLD! While it has a few unique ingredients, it creates an easy glaze that is the perfect balance between sweet and savory.

Tips for the Best Baked Ham

The key to a really great ham is to NOT overcook it. We have all had our share of dried-out ham and that is not pleasant! We want to be sure to just warm the ham, as it is already cooked.

Another way to ensure your ham remains juicy is to cook the ham in a moist environment. That is why when I am preparing a small ham, I use my recipe for Instant Pot Ham as the pressure cooker creates a moist environment. But for a large ham, we can easily create an environment in the oven that will keep this ham moist and juicy--and deliver fabulous results! To create moist heat in the oven, I use a roasting pan fitted with a rack and bake the ham over water. The water will create steam as the ham bakes, which will help to evenly and slowly cook the ham without drying it out.

And finally, my number one tip for a really juicy baked ham is to wrap the ham in foil. As the ham bakes, it stays moist, thanks to the foil, and the glaze seeps into the ham, flavoring the entire ham--not just the outer layer. Plus this makes the process of clean-up super simple!

How to Make Glazed Baked Ham

How to Caramelize the Ham Glaze

If you want the crispy, caramelized edges on the exterior of the ham, you can opt to broil the ham. To do this, remove the ham from the foil and place the ham back on the roasting pan. Broil the ham under high heat, keeping a close eye on it so it does not burn, and broil for a couple of minutes.

Please keep in mind, that this tends to dry the ham out VERY quickly and really isn't necessary. The glazed ham is perfect simply baked.

How Long Should You Bake Ham?

Because the ham is precooked, we are essentially just reheating. Therefore, we do not want to overcook the ham.

According to the USDA, ham is safe to eat after being reheated to 140 degrees Fahrenheit. The best way to determine how long to bake is to insert a digital thermometer into the thickest part of the ham and set an alarm for 140 degrees.

How Much Ham Do I Need Per Person?

For a quick family meal or a smaller holiday gathering, I typically make Instant Pot Ham. However, when I am entertaining a larger crowd or desiring leftovers, this is my go-to recipe for Ham.

If you enjoyed this recipe for Baked Ham, I would love for you to leave a comment and review below. 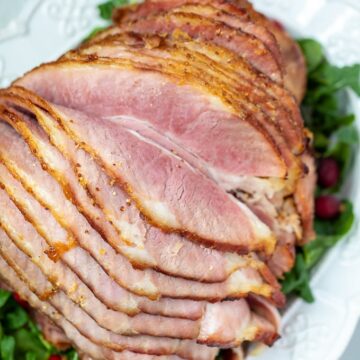 This recipe for baked ham is one of the easiest recipes for ham. It is baked low and slow in the oven with a sweet and savory glaze that gives this ham the most incredible flavor.
5 from 14 votes
Print Pin Rate
Course: Main Course
Cuisine: American
Prep Time: 5 minutes
Cook Time: 2 hours
Total Time: 2 hours 5 minutes
Servings: 16
Calories: 257kcal
Author: Kristen Chidsey