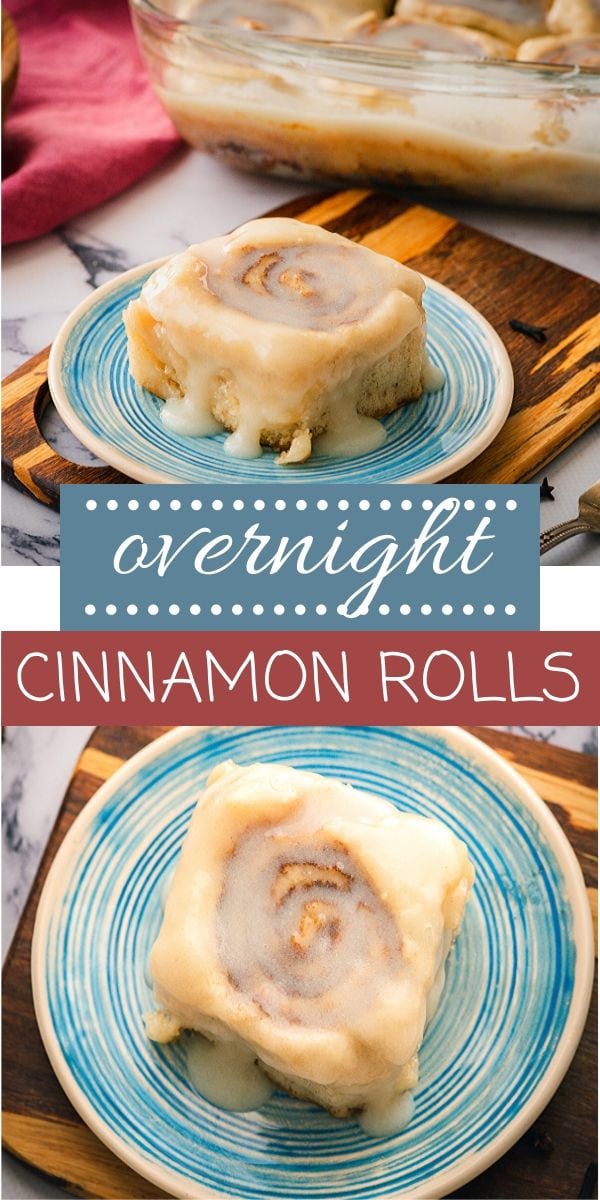 This is the best recipe for Overnight Cinnamon Rolls! Soft, tender, and oozing with cinnamon flavor, no one would guess these cinnamon rolls are not only incredibly easy to make but also much lower in fat and calories than most recipes.

Because these Cinnamon Rolls can be made in advance, they are perfect for lazy weekends or holiday breakfasts. Pair them with Hashbrown Breakfast Casserole and Bellini Cocktails for a holiday breakfast to remember.

My husband, who is a devoted Cinnabon fan, declared he would happily take my Homemade Cinnamon Rolls any day over Cinnabon's.

Now that is what I call success!

Little did he know that I made a few healthy swaps when preparing these Cinnamon Rolls.

While saving a few calories here and there is all well and good, it really does not matter if the taste is compromised--I mean we are talking cinnamon rolls here, they are supposed to be decadent!

From the yeasty homemade dough to the warming spices to the cream cheese glaze, these Healthier Cinnamon Rolls still taste incredibly rich and decadent.

While this recipe uses flour, butter, and sugar, which are not exactly known to be healthy ingredients, it uses significantly less than most recipes. The trick is using just enough to still deliver the classic flavor, minus the excessive fat and calories.

How to Prepare Overnight Cinnamon Rolls

What I truly love about this recipe is the fact that these cinnamon rolls can be made the night before and baked in the morning. Making this recipe for Overnight Cinnamon Rolls perfect for holiday mornings, entertaining, or a lazy weekend.

The first step to making Cinnamon Rolls is to start by preparing the bread dough, which can be prepared by hand or with a bread machine.

Once the dough has doubled in size, you are ready to assemble the cinnamon rolls.

How to Store and Reheat Cinnamon Rolls

If you have leftover cinnamon rolls, store them in an airtight container in the refrigerator for 2-3 days.

To reheat cinnamon rolls, preheat oven to 300-degree oven and bake for 10-15 minutes until warmed through or in the microwave for 45 seconds.

How to Freeze Cinnamon Rolls

If you want to get a jump start on your holiday breakfast or just have homemade cinnamon rolls in your freezer for when the craving strikes, you can freeze these cinnamon rolls.

Do I have to prepare these Cinnamon Rolls the night before?

Abosolutely not! Preparing the night before is an easy option for busy mornings, but you can prepare this entire recipe in the morning or really any time of the day! Instead of placing the cinnamon rolls into the refrigerator once assembled, allow them to rise for about an hour or until doubled in size. Bake and glaze as directed.

Can I prepare the Cinnamon Roll frosting the night before?

Yes! To prepare glaze in advance, whisk together the ingredients and store it in an airtight container in the refrigerator overnight. In the morning, remove the glaze from the fridge while the cinnamon rolls bake. Once the glaze has come to room temperature, give it a good whisk, adding a teaspoon or two of milk if needed to reach the consistency desired.

Can I use store-bought bread dough to make homemade cinnamon rolls?

Yes! Use 1-pound of your favorite bread dough in place of the homemade cinnamon roll dough.

Can this recipe be made dairy-free?

Yes! Simply use your favorite nondairy butter, such as Earth Balance, in place of th butter. To make the glaze dairy-free, omit the cream cheese, and use dairy-free milk. The glaze will be thinner, but absolutely delicious.

I would love to hear if you enjoyed these Cinnamon Rolls as much as my family does. Please leave a comment and review below! 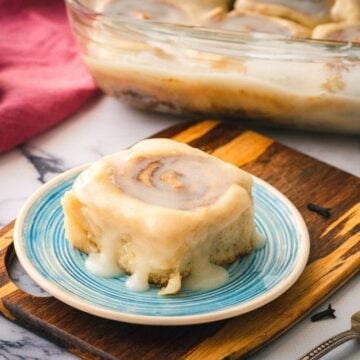 For the Cinnamon Roll Bread Dough

For the Filling for Cinnamon Rolls

For the Cinnamon Roll Frosting

For the Cinnamon Rolls

For the Cream Cheese Glaze

Active prep time is only 10 minutes.  To Prepare Cinnamon Rolls Immediately: Prepare the cinnamon rolls as directed up to placing the assembled rolls into the baking dish. Cover with a clean towel and let the dough rise until doubled, about an hour. Once doubled in size,  brush with butter and bake as directed.  To Reheat Cinnamon Rolls: If you have cinnamon rolls leftover, store them in the refrigerator for 2-3 days. To reheat cinnamon rolls, preheat oven to 300-degree oven and bake for 10-15 minutes until warmed through or in the microwave for 45 seconds. To Make Dairy-Free Cinnamon Rolls: Use a vegan butter spread, like Earth Balance, in place of the butter. To make the glaze dairy-free, omit the cream cheese, and use dairy-free milk. The glaze will be thinner, but absolutely delicious.

This recipe has been adapted from Giada De Laurentiis Hazelnut Cinnamon Rolls.