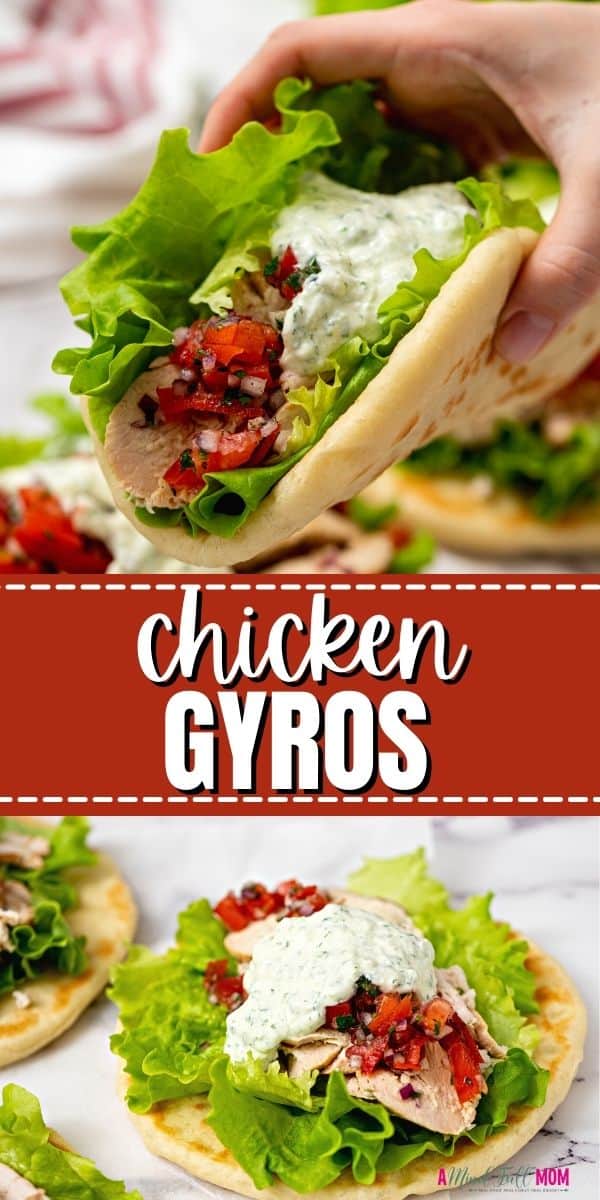 Chicken Gyros are an easy, wholesome meal that is packed full of flavor! Warm pita bread is stuffed with tender yogurt-marinated Greek chicken, fresh tomatoes and onions, and Tzatziki sauce to create a Greek Chicken Gyro that is sure to become a favorite go-to recipe.

There may be controversy on how you pronounce the word gyro, but there is no controversy on how good a simple gyro is. Tender meat, fresh tomatoes, warm pita, and creamy Tzatziki Sauce, create a masterpiece of contrasting textures, temperatures, and flavor.

However, that is no reason to not enjoy Greek Gyros at home! Greek Chicken makes a great substitute for the classic lamb. Making preparing gyros at home, simple and affordable. But most importantly, this recipe for Chicken Gyros is still 100% delicious!

Chicken Gyros are made with grilled Greek Chicken, fresh tomatoes, onions, and Tzatziki sauce served on pita bread. However, what sets this recipe apart is attention to the details. Use my guide for ingredients to pack in the most flavor, with minimal effort!

How to Make Chicken Gyros

In order to impart Greek flavors into the chicken to replicate the flavors you know and love in classic gyros, it is crucial to marinate the chicken, using my recipe for Greek Chicken Marinade.

Whether you choose to grill your chicken on the grill or using a grill pan on the stove, adding a nice sear to the marinated chicken will provide texture and flavor to the gyro itself.

Take a few minutes to prepare the pita bread, tomato mixture, and lettuce for the Chicken Gyros while the chicken is grilling or resting.

Gyros are best assembled immediately prior to serving, to keep the pita bread from becoming soggy and for the warm pita and chicken to contrast to the cool tomatoes and Tzatziki sauce.

Chicken Gyros make a delicious, wholesome meal any night of the week. This hearty Greek wrap if filling on its own, but can also be paired with a side for a filling family dinner.

If you enjoyed this recipe for Homemade Chicken Gryos, I would love for you to leave a comment and review below. 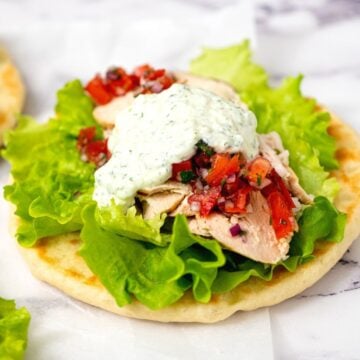 For the Tomatoes and Onions

For the Chicken Gyros

Storage: Store leftover cooked chicken in an airtight container for up to 3 days in the refrigerator. Keep the tomato and onion salad and Tzatziki sauce in separate containers for up to 3 days stored in the refrigerator.  Serving: It is best to warm pita bread and assemble the gyros immediately before serving. Only prepare as many gyros as you intend to eat, saving the components to make more at a later time if desired.   Yogurt: Be sure to use plain, unsweetened Greek yogurt for the marinade.  Baking Chicken: If you don't have a grill or grill pan, you can opt to bake the marinated chicken instead. Preheat the oven to 400 degrees F. Remove chicken breasts from marinade and place on oven safe broiler pan or sheet pan. Bake chicken breasts for 18-20 minutes, or until chicken breasts reach an internal temperature of 165 degrees F. Remove chicken from oven and let rest for 5-10 minutes. Slice into thin strips. Assemble gyro as directed.

This post was originally published in 2017 but updated in 2022 with new photos and a new video.