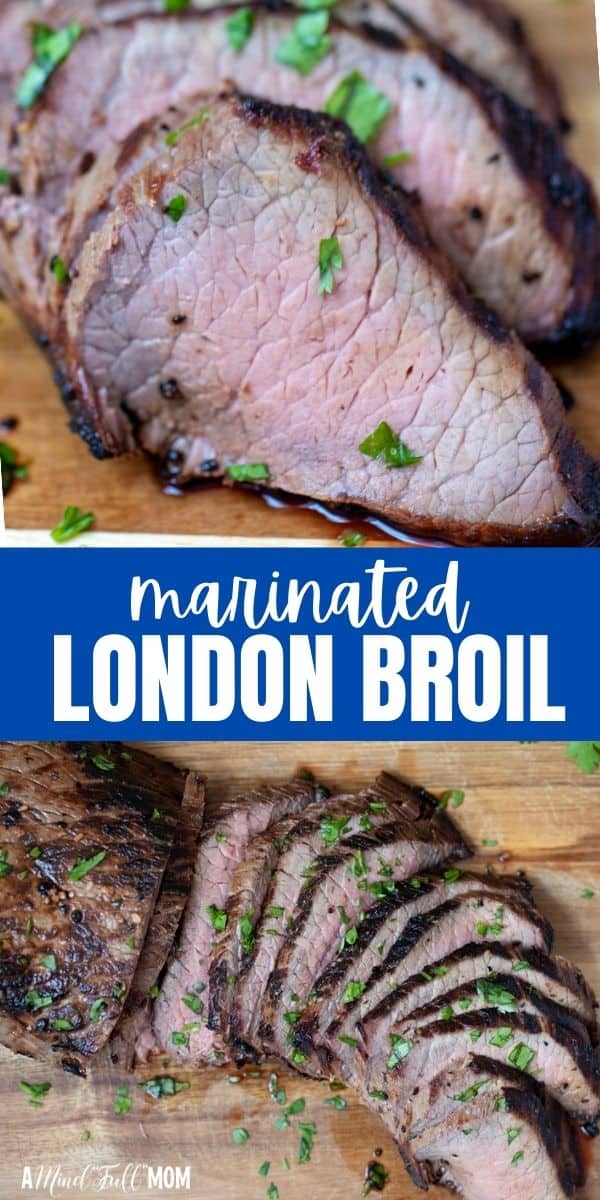 This easy preparation for London Broil results in a delicious tender cut of beef after being marinated to perfection.

Made with inexpensive ingredients, this recipe for London Broil has spectacular results. The beef is tender, juicy, and flavorful! Pair with Roasted Red Potatoes or Twice Baked Potatoes and a Spinach Avocado Salad for a delicious meal.

Growing up, my mom often made London Broil. We viewed it as a fancy dinner because the flavors were so impressive.

But there is nothing fancy about London Broil. It is made with simple ingredients and an inexpensive cut of beef. And when prepared correctly, the results are spectacular.

What is London Broil?

Even though you may find cuts of beef labeled as London Broil, London Broil is not actually a cut of beef, but instead, it refers to the preparation. It is typically a top round steak or flank steak that is marinated and then broiled in the oven.

The combination of marinating and broiling at high heat results in a tender, succulent piece of beef from a tougher cut of beef.

How to Marinate London Broil

This cut of beef is desperate for flavor. My recipe for London Broil Marinade is made with simple ingredients that pack a ton of flavor into the beef while working to tenderize the beef.

You want to marinade the beef for at least 2 hours, but 8-12 hours is best. For best results, don't marinate longer than 24 hours, as the meat can begin to break down and become mushy.

How to Cook London Broil

London Broil is best served immediately. However, leftover London Broil can be stored in a sealed container for 3 days.

If the leftovers are cut into slices already, reheat the slices in a dry skillet quickly until just warm. If the London Broil is not sliced, broil for 2 minutes per side just to warm through.

I find that leftover London Broil is best when used in the filling of quesadillas, fajitas, tacos, as a filling for a quick steak sandwich, or for topping on a salad instead of being served alone.

Can you prepare a London Broil on the grill?

Yes, you can certainly grill your marinated cut of beef. Preheat your grill to medium-high. Remove the meat from the marinade and then grill for 7-8 minutes per side, or until the internal temperature reaches 130-135 degrees.

What is the best temperature to cook London Broil to?

London Broil is best served medium-rare, which is between 130-135 degrees Fahrenheit. While you can cook to medium or medium-well, the meat will not be as tender or juicy.

What does it mean to cut meat against the grain?

If you look at the London Broil, there are parallel lines of muscle fiber running down the meat. You want to cut in the opposite direction, or perpendicular, to those parallel lines. This results in tender, melt-in-your-mouth steak.

Can you use another marinade for this London Broil?

Yes! Feel free to use any of your favorite marinades in place of this pineapple soy marinade. Just be sure that you don't marinate the beef for longer than 2 hours if the marinade is made with lemon or lime juice, as the acid will break the beef down too much if marinated past 2 hours.

Do you have to use an oven-safe digital thermometer?

Need more inspiration for planning meals that your family will love? Sign up for my FREE Meal Plans and each week you will get a meal plan with a shopping list.

If you tried this marinated London Broil, I would love for you to leave a comment and rating below. 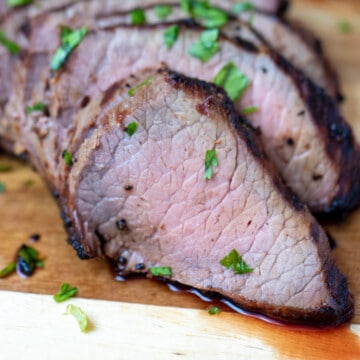 Cut of Beef: London Broil is not a cut of beef, but instead a preparation method using either flank or round steak. However, it is often sold labeled London Broil. Temperature of the Meat: London Broil is best served medium-rare, which is an internal temperature of 130-135 degrees. This is best determined by inserting an oven-safe digital thermometer into the center of the steak and monitoring the temperature. Cook to 140-145 degrees for medium doneness, 150-155 for medium-well, or 160-165 degrees for well done.  Leftover London Broil can be stored in a sealed container for 3 days. Reheat slices in a dry skillet quickly until just warm, or broil unsliced London Broil for 2 minutes per side just to warm through.  Control the heat by omitting or decreasing the amount of crushed red pepper flakes in the marinade.